Recent discoveries of large shale and tight gas reservoirs in the U.S. and many other parts of the world have led to an increased interest in natural gas utilization. Methane, the major component of natural gas, is commonly used for electricity generation (combustion) and conversion to syngas, a mixture of CO and H2. A large portion of natural gas reserves, however, are flared annually, and use of methane as feedstock for the production of liquid hydrocarbons and other useful chemicals possesses untapped potential. A number of catalysts have been proposed for this purpose, and zeolites, a class of microporous aluminosilicates, have been attracting a lot of interest owing to their versatility and tunability of their physiochemical properties. 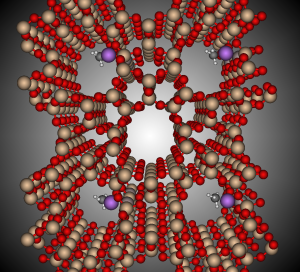 In our group, we are focusing our efforts towards the design of tailored zeolite catalysts to improve the conversion of methanol to hydrocarbons (MTH) and non-oxidative coupling of methane (NOC). We collaborate extensively with the Rimer Group and leverage its complimentary experimental expertise to develop a complete theory-aided design and kinetic modeling skill-set for zeolites, spanning synthesis, characterization and catalytic performance.

Thus far, we have demonstrated that van der Waals interactions in the narrow pores of zeolite ZSM-5 lead to strong local confinement effects, resulting in active Brønsted acid sites with unique properties at crystallographically distinct locations. Investigations into the mechanism of methanol dehydration contribute to a better understanding of the complex interplay between pore confinement, acidity, and reaction conditions, and their effect on pathway selectivity in zeolites. Most recently, we employed detailed theoretical calculations to explain the surprisingly low CO2 sorption capacity of zeolite GIS, and showed that it is better suited to remove water and produce dry streams of CO2 or natural gas.